"Saint Catherine’s Monastery, Greek Orthodox monastery situated on Mount Sinai more than 5,000 feet (1,500 metres) above sea level in a narrow valley north of Mount Mūsā in the Sinai peninsula...The monastery’s greatest treasures are its icons, some of which were painted before the 8th century, and its manuscripts. These, housed in a library built in 1945, are mainly Greek and Arabic...The manuscript collection includes the Codex Syriacus, a Syriac text of the Gospels written about 400. A nearly complete Codex Sinaiticus, a Greek manuscript of the Bible dating from the 4th century that formerly belonged to St. Catherine’s, is now in the British Museum in London. In 1975 workmen accidentally penetrated a wall and discovered behind it a trove of some 3,000 additional manuscripts, including ancient biblical texts and other documents known but long lost, along with assorted works of art. Among the find were missing parts of the Codex Sinaiticus, some 50 other incomplete codexes and 10 nearly complete ones, and other Greek texts in uncial script that shed new light on the history of Greek writing." (Britannica Academic, s.v. "Saint Catherine’s Monastery," accessed February 27, 018, http://academic.eb.com/levels/collegiate/article/Saint-Catherines-Monastery/64815). 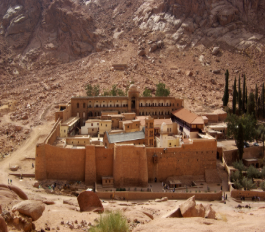 What is a Commentary?

A Bible commentary is a common published form of a biblical exegesis (a critical explanation or interpretation of a text, especially a religious text) and typically takes the form of an encyclopedia-like set of books each of which are devoted to the exposition of one or two books of the Bible, in the order they appear in the Bible.

*Finding commentaries in the CCU Library

Hermeneia: A Critical and Historical Commentary on the Bible